Meoto Iwa (夫婦岩), or the Married Couple Rocks, are a couple of small rocky stacks in the sea off Futami, Mie, Japan. They are joined by a shimenawa (a heavy rope of rice straw) and are considered sacred by worshippers at the neighboring Futami Okitama Shrine (Futami Okitama Jinja (二見興玉神社)). According to Shinto, the rocks represent the union of the creator of kami, Izanagi and Izanami. The rocks, therefore, celebrate the union in marriage of man and woman. The rope, which weighs over a ton, must be replaced several times a year in a special ceremony. The larger rock, said to be male, has a small torii at its peak. The best time to see the rocks is at dawn during the summer, when the sun appears to rise between them. Mount Fuji is visible in the distance. At low tide, the rocks are not separated by water. Okitama Shrine is dedicated to food goddess Miketsu. There are numerous statues of frogs around the shrine. The shrine and the two rocks are near the Grand Shrine of Ise, the most important location in Shinto. 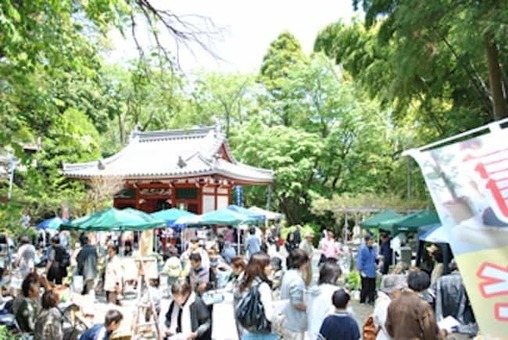