Kumano Hongū Taisha (熊野本宮大社) is a Shinto shrine located in Tanabe, Wakayama Prefecture, deep in the rugged mountains of the Kii Peninsula of Japan. It is included as part of the Kumano Sanzan in the UNESCO World Heritage site "Sacred Sites and Pilgrimage Routes in the Kii Mountain Range". The main deity enshrined is Kumano Gongen (熊野権現). All of the ancient Kumano Kodō Pilgrimage routes lead to this Grand Shrine. It was originally located at present Ōyunohara (大斎原), on a sandbank at the confluence of the Kumano River and Otonashi River. In 1889 it was partially destroyed in a flood and the remaining shrine buildings were relocated at its present site in 1891. Of the original five main pavilions only three were rebuilt. Four deities were moved there and the other eight are still enshrined there in two stone monuments. In 2000, the largest Torii shrine gate in the world (33.9 meters tall and 42 meters wide) was erected at the entrance to the Oyunohara sandbank. It’s an official gateway that designates the entrance to a sacred area. It signifies the division of the secular and the spiritual worlds. This Torii is called Otorii, O means “big”, and is made of steel weighing 172 tons, which took about 6 months to make and another 6 months to assemble. 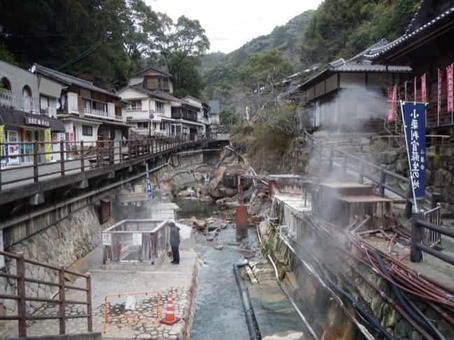